OUR FIRST REVIEWS from March 2018

First up was a joint favourite ... 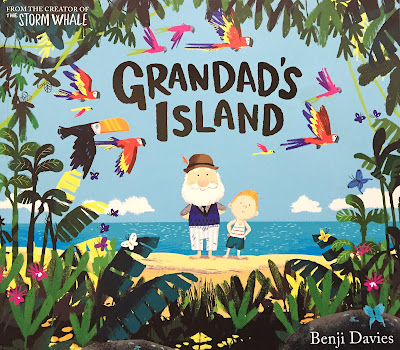 I was immediately drawn to the seeming simplicity and color scheme in the illustrations of this book. I’d read a few Benji Davies books previously and was prepared to find something that I liked, but the tenderness and peacefulness I found in this book surprised me.

In the opening of Grandad’s Island we meet Syd. He fetches the key to his Grandad’s house and lets himself in. We immediately feel that the he and his Grandad have a special relationship. They spend a lot of time together. But Grandad’s NOT in any of the usual places. This introduces a kind of tension directly on the second page of the story.

But then Grandad calls Syd up to the attic, a place where Syd had never been before. This juxtaposes the familiar and safe environment with the potential for some change.

When Grandad opens the portal they are transported to a giant ship overlooking the entire town. And they set forth on an adventure.

At this point, we don’t have any driving force behind Syd’s actions more than that he is ‘hanging out’ with Grandpa. 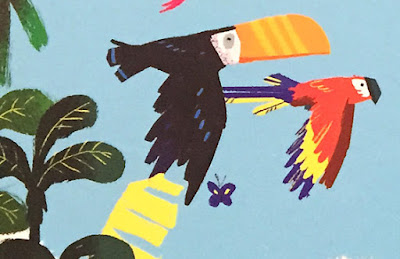 They land on the island and get busy making it into a cosy place. Syd doesn’t seem to need or want more than to help out. They explore the island, which is wonderful and towards the end of the story Grandpa tells Syd that he wants to stay.

Syd seems to understand that Grandpa will be happy here and sails home alone.

When Syd visits Grandad the next morning everything is like it used to be except that Grandad really isn’t there and on the very last Syd receives a picture of a Grandpa who is happy where he is.

I found that this book deals with a sense of loss in a tender and kind way.

Regarding flow and page turns. Although each illustration works well, one after the next, I didn’t get any feeling that I ‘had’ to turn pages. The spreads presented the written material in a straightforward way.

Paul ...
I'm immediately drawn to this book by the cover artwork, lush tropical colours and the promise of a warm relationship between grandad and the young boy, Syd.
I love the mark making in the pictures. As an illustrator I'm constantly looking at how  illustrations have been created and, as we've discussed before, it looks like ProCreate or similar, mostly blocks of brashly drawn colour with line work occasionally visible.
This book like many other popular, recent pb's 'breaks' the rule of 12 spreads as – this has 14, plus title page and endpapers. 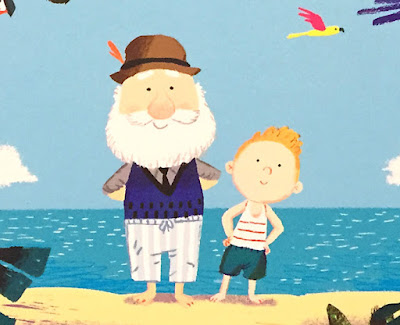 I'd like the luxury of preparing MY stories with extra spreads but think we're safer submitting the standard 12 spreads and 'upgrading' to more if accepted. : )
The story doesn't have the classic, 'problem to be solved' but is rather a celebration of the fantastic journey and escapade.
It was only in retrospect, reading an interview with BD, that I realised there are hidden clues and hints in the pictures. Title page shows a painting of the island which when turned 45 degrees is revealed to be Grandad's profile.
And grandad has been painting and drawing the shack that they eventually will live in.
And in the loft there's a turtle shaped tea pot and an orangutan head dress or mask.

The story is 507 words. That's about PB average? On a couple of spreads there are 60+ words which seems quite high for one spread
The story could be an allegory about the 'death' of grandad and is a tenderly charming and satisfying way of dealing with the loss. Syd enjoys a special relationship with him and they share an unbelievably wonderful trip and holiday on the island together, a shorthand for life perhaps.
It strongly reminds me of the film UP and covers similar sentiments, the way the old Mr Fredrickson wants to reach Paradise Falls after the loss of his partner.
I love the preposterous idea that Grandad's loft is really the entrance to the deck of a huge ship, wonderful. This echoes the Monty Python 'B' film "The Crimson Permanent Assurance" 1983, where investment brokers 'un-anchor' their high street office block and set sail through piratical waters in London's financial district. 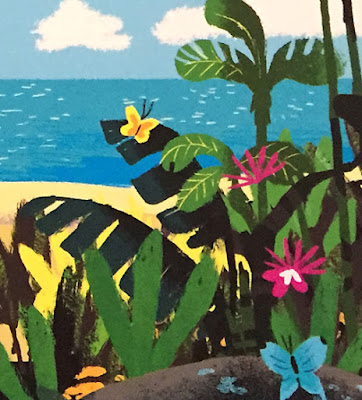 After lots of fun times, Grandad tells Syd that he's decided to stay on the island and Syd does accept it –  after at first enquiring if he'd not be lonely. But BD then shows us the fullest, busiest and most colourful spread to prove to Syd that Grandad will be far from lonely.
Talking of spreads.
There are 2 that, for me, stand out as just breathtakingly wonderful.
The double spread of grandad and Syd painting, lit glowingly by the light reflecting off the thundering waterfall is fantastic. Mostly muted somber colours that throw forward the silhouettes of the 2 painters. The bottom left hand corner has 3 large lemon yellow trumpets of flower heads that add an extra illumination.
The pair seem to be so happy, concentrating on their painting totally 'at home' in a fairly perilous position on a fallen tree across a chasm.
The other spread I love is the very next page, single full page illustration that depicts their utter joy and happiness as they plunge carefree into the cascading waterfall, bliss.
After Syd accepts Grandads decision to stay, he returns home undaunted and quite independently across the oceans, in a scene reminiscent of BD's Storm Whale spreads. 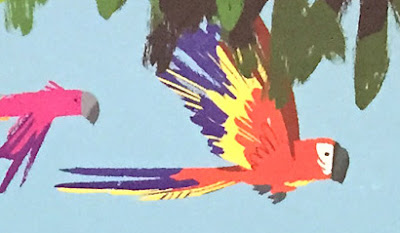 At the end as Syd stands, slightly forlornly, at the bottom of the loft ladder in Grandad's now-silent house, we almost start to feel his sadness and yearning but it doesn't last long enough to develop because we are happily re-assured, as is Syd, of Grandad's peace and enjoyment with the arrival of a picture postcard.
The story is told in a mixture of full double spreads (6), full single pages (7) and vignettes on white (11)

Based in Stockholm etc etc